I'd never been to the IKON before, but it has won a place in my heart.  The building is a beautifully converted noegothic school in the heart of the new canal district in Birmingham.  The exhibition spaces are very well laid out, and the restaurant was so lovely and staff so friendly, that we went back for a meal in the evening. 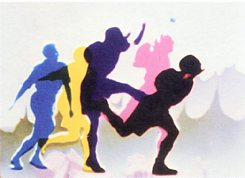 Their current exhibition is the first UK retrospective of Len Lye's work, and includes film, paintings and kenetic sculpture.  Lye (1901-1980) was a New Zealander who travelled widely in the Pacific before settling in London in 1926, becoming friends with artists such as Henry Moore and Barbara Hepworth.

The most surprising aspect of the exhibition is the film work.  Produced between 1929 and 1937, the films which are a riot of colour, pattern and movement, could easily be mistaken for contemporary work.  Given the technical limitations of the time, they are extraordinary.  Len Lye developed his own style of 'direct' film making, where he painted directly onto the celluloid, which combined with layering of images, created an exciting and sometimes frenetic montage.

Lye's first film, Tusalava, a 10 min black and white animation made in 1929, shows the influence of Pacific Island and Aboriginal imagery, weaving continuous patterns that show a kind of evolution of growth, division, development and death.

In the 30's, Len made a number of advertising films for the GPO, including 'Rainbow Dance' (1936) using a real actor alongside animation to show the sort of leisure activities which would be affordable if one saved using a PO Savings Account. Trade Tattoo creates a complex multi layered journey through the industrial and commercial work day, with a big band jazz sound track providing the fast paced rhythm, and ends by encouraging the viewer to remember to post letters before 2pm.  The advertising copy in the final scenes of the films adds yet another surreal quality. 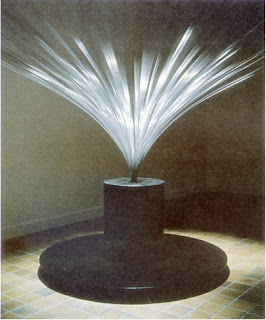 Equally fascinating are his kenetic sculptures, made from the 50s onwards which bring sound and vision together as metal clashes, vibrates and rings out.  In Fountain, (1976) long stainless steel rods splay out from a central point in a base which periodically rotates clockwise and anticlockwise, causing the rods to swish and sway and crash into each other. Lit from above, the shadows add a further element to the piece. Universe (1963-66) involves a steel band, looped into an oval and fixed centrally in a low bench.  As an electromagnet is activated, the huge structure rolls back and forth, sometimes being squeezed upwards and hitting a ball suspended above it, with a resonant chime.

Each piece in the exhibit was a joy to behold, and the whole exhibition felt like a celebration of life.  The IKON deserve a big thanks for bringing Len Lye's work to greater attention.
http://www.ikon-gallery.co.uk/
Posted by annie harrison at 05:31