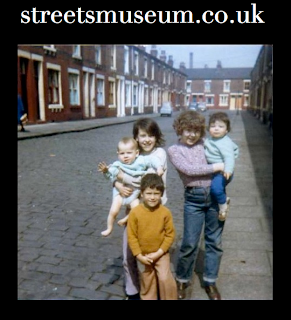 On Thursday I met Lawrence Cassidy at the lovely Left Bank Cafe in the Peoples History Museum, to talk about our common interests.  Lawrence is the initiator of the Streets Museum which documents the demolition of over 1500 streets in Salford in the past 50 years.  The Streets Museum archives and preserves images, film, oral history and artefacts of the lost streets, and supports people to commemorate and mark the passing of their neighbourhoods.

Lawrence was inspired by the District Six Museum in South Africa, which collects memories of the once-thriving district which was wiped out in the Apartheid era.  Lawrence saw a parallel process of social engineering happening in own area, and was inspired, first to study the phenomenon, and then to establish the Streets Museum.

I gave Lawrence a copy of my artists book, 'Cow Lane, Salford' for the Streets Museum collection.  The book shows some of the things that Lawrence is highlighting in his project, the way that vast communities can disappear completely because they no longer fit the model of economic activity in the city.  And yet, every person, every relationship is unique, and once people are moved and relationships are interrupted, they can be lost altogether.  I think the Streets Museum is a really important project.
Check out the Streets Museum website at www.streetsmuseum.co.uk
Posted by annie harrison at 13:34

What an interesting blog, introduced by a thought-provoking photo. The unusual wall painting of the dwellings is also a strangely modern interpretation. Something like this hieroglyphic view of a park by Swiss painter Paul Klee, http://EN.WahooArt.com/A55A04/w.nsf/OPRA/BRUE-8LT475.
The image can be seen at wahooart.com who can supply you with a canvas print of it.