I've been feeling creatively frustrated recently, so to get a bit of perspective,  I wrote down everything I've done over the last year. I realised that alongside the collaborations which have been really great fun and really successful, I've done a lot of research that for one reason or another, hasn't translated into actually making things. So I've decided to use the research for the 'Placed' exhibition proposal that has yet to find a home, and make another artists' book. 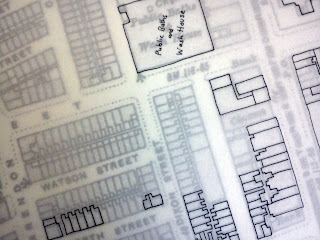 When I showed 'Cow Lane, Salford' last year, lots of people asked me if I would make a book about Hulme, so I've been studying maps looking for an appropriate street. I've found the perfect one, just next to where I used to live. Leaf Street was laid out in the 1830's when the new district of Hulme was being planned. It's seen a lot of changes, but  has kept it's original location. The book will show the three waves of development in Hulme from 1819 to the present day.

I'm hoping to get it finished in time for the Manchester Artist's Book Fair in October, and if possible, have copies for the Rogue Open Studio. It will be similar to the one I made about Cow Lane, Salford, and I will be using what I learnt to speed up the production process! I've done the research this week and have already started drawing the illustrations, so am on track to meet my deadline.