This post documents a walk taken last March.  I've been a little tardy in my blogging lately, but inspired by Morag Rose's course 'The Art of Walking', http://www.cornerhouse.org/education/education-courses/the-art-of-walking I've revisited the photos.  I've forgotten a lot of the detail, but have pieced together our route, and here are the highlights.

The Irk empties into the Irwell at it's elbow, the turn from north-east to north west, near Manchester Cathedral.  As early as the 1890s, the Irk was out of sight under the railway bridge leading into Victoria station, and the roads, Hunts Bank and Walkers Croft. 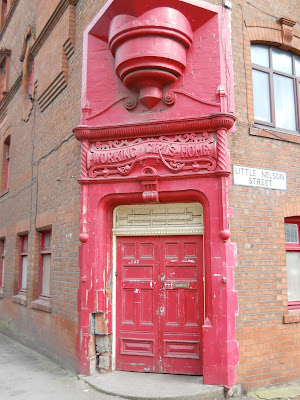 We followed Dantzic Street, past the Working Girls Home, and caught our first glimpse of the river down a little alley opposite the aptly named Irk Street, where it nestles in behind a car wash. 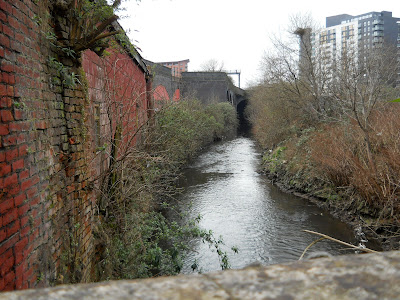 The road leaves the river which curves away from it.  In the island between are the caravans of a travellers site isolated from the city and it's services.  Then road and river come together again, separated only by a rather fetching blue fence. 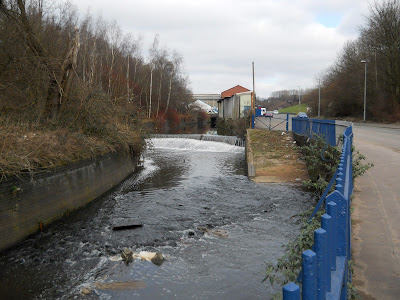 Following Collyhurst Road, the city seems far behind us. 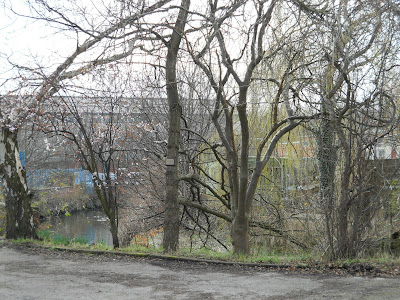 We climb high above the river, to the Hellfire Club at the junction of Collyhurst Road and Queens Road. 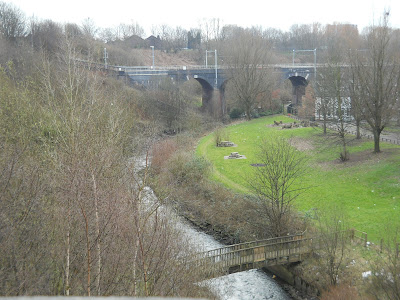 At Hendham Vale we can see the river in it's industrial context as a mill chimney rises up in front of us. 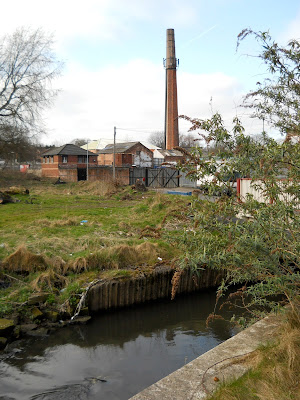 We lose the river, and then pick it up at the top of the winding Harpurhey Road. 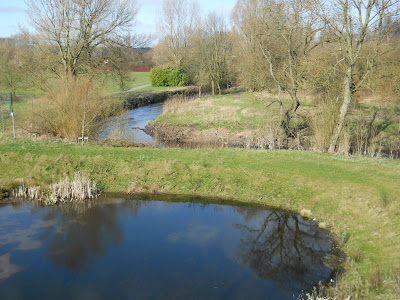 We lose it again in the jumble of a new estate, and then catch another glimpse down below the new buildings. 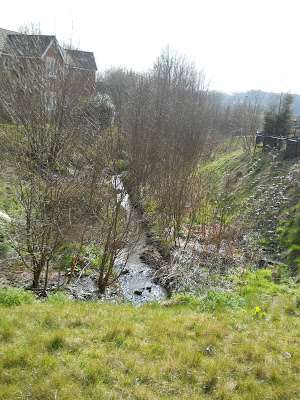 At the top of Crumpsall Vale, we discover the amazing Hexagon Tower 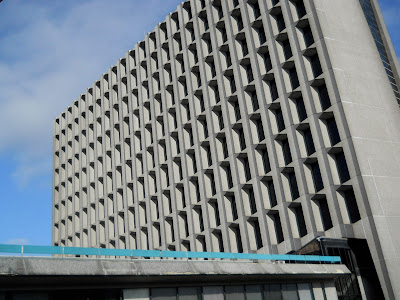 We end our exploration at Heaton Park, but here are our last glimpses of the River Irk, looking very handsome 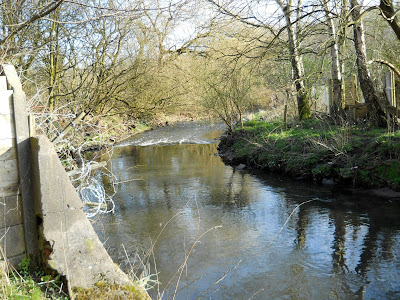 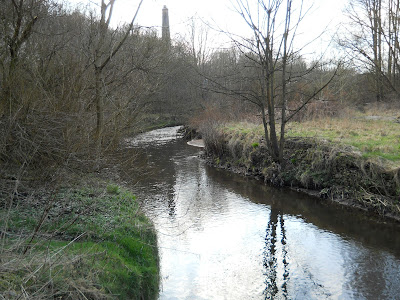 The entire walk took us about 2 hours, including getting lost, and was carried out using nothing more technical than an A-Z.  There's lots more to explore out there...
Posted by annie harrison at 09:53 No comments:

I've just got back from Kassel's five-yearly art festival, Documenta. What an extraordinary experience. We spent seven full days there, at least eight hours a day, and still didn't see it all.  I have way too many favourites to write about, I still need to digest everything I have seen, but here are a few images:

Posted by annie harrison at 12:46 No comments:

I've seen some spectacular exhibitions lately.  In a single day last month I saw Lucien Freud's Portraits at the National Portrait Gallery, Jeremy Deller's 'Joy in People' at the Hayward and David Hockney's 'A Bigger Picture' at the RAA. It was the right order, starting with Freud's fabulous technique, but quite dark images, Deller's exhibition was perfectly named - full of joy in the ordinary, and then to finish off the day,  an evening viewing of Hockney's magnificent and exuberant work - what an experience! 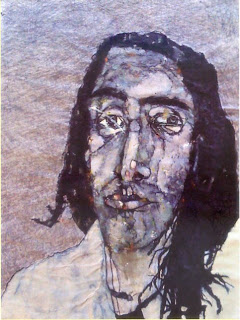 This week I went to a much smaller show in a student gallery, by an unknown artist.  But in it's own way it was equally as impressive as those big London shows.

Richard Creme was a well-known character in Manchester - not only did he own a high-end mens fashion boutique, stocking the best designer garments from around the world, but he was also physically a giant of a man. Five years ago he suffered a stroke that left him unable to communicate and out of that frustration, he began to create the most amazing and moving art. It is being shown in a very short exhibition at the Link Gallery at MMU.  Don't miss it.

For a short film about Richard follow this link:

Sarah Sander is a very good teacher.  In her drawing classes, 'Returning to Drawing' she holds a creative space for the participants, with a bit of input and introduction, a clear theme, a lot of encouragement and a non-judgemental attitude that makes drawing a pleasure for even someone like me who can be very anxious about it.

There are no rights or wrongs in Sarah's classes, only creative experiments.  She manages a good balance between individual support and group process.  Best of all, she is an enthusiast who is prepared to show her own work, a real mixed bag of scribble and doodle, drawing from life, experiments with movement and mood, and imaginative work. This reinforces the message that drawing can be anything, and the most important thing is to get started.


I definitely recommend Sarah's classes for anyone who is feeling in need of creative refreshment, or a bit of structure to help with discipline.  The classes are currently weekly at Rogue Artist's Studios.  See you there!
http://returningtodrawing.blogspot.com

Posted by annie harrison at 04:59 No comments:

Rogue was the first artists' studios I ever visited, way back when Richard Diggle ran weekly life drawing sessions, and I used to scratch away nervously, listening to the rhythm of the knitting machines in the floor above, and hoping no-one would look at my work.  It seemed like another world. and I never in my wildest dreams imagined that I would one day have my own studio there.

All my life I knew I wanted to be an artist, but I thought I would never be one, because I never actually made anything that I thought was art.

In the last 6 years, I've discovered that what needed to change was my definition of art. Those obsessions and interests that I have sometimes followed and mostly ignored, are now given permission to grow and they have become my practice.

Last night at my first Rogue Open Studio I was able to show in my own studio, a small body of work that I have allowed to grow out of my own individual fascinations, and it felt like a graduation!
Posted by annie harrison at 00:27 No comments: 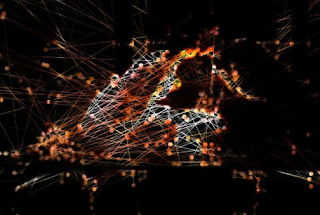 Dark Matters looks both backwards to the earliest fascinations with shadow and projection, and forwards to the newest technologies. The gallery is kept in an erie semidarkness and becomes a place of wonder and mystery which perhaps replicates the experience of the first viewers of the camera obscurer and magic lantern.

The exhibition showcases the work of 10 artists, whose work ranges from the small and subtle to the monumental. In a preview evening, the larger works are bound to make more impact, and I was captivated by Brass Art's new work, Still Life No. 1. A table is covered by human and animal figures cast in transparent material using new technology in digital mapping, and constructed by hand out of crushed cellophane  A rotating light source casts ephemeral looming shadows which transverse the gallery walls.  On the other side of the gallery, but equally impressive, huge monochrome watercolours depict shadows of the moment of contact between the artists and insects.

Kiss (2011) by R. Luke DuBois uses a digital rendering technique to animate 50 iconic film kisses, turning them into a spiders web of light, with the actors faces seen only in silhouette. 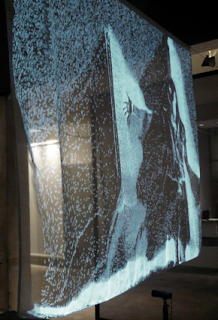 Daniel Rozin is showing two fascinating pieces, where we see ourselves, always the most interesting subject, reproduced in the work. Peg Mirror (2007) uses a tiny camera and 650 circular wooden pegs which rotate and tilt, and whose subtle shadows create a vague and pixillated image of the viewer. Snow Mirror (2006) uses digital technology to project an image made up of softly moving points of light, which coalesce into momentarily recognisable figures.

A performance piece by Ja-Young Ku uses layers of shadow and projection to interact with his own image, creating a playful and mesmerising exploration of reality and illusion.

The exhibition is fascinating and I highly recommend a visit.  I will be returning soon for another look.

Posted by annie harrison at 03:04 No comments:

'Like you've never been away' - Photographs by Paul Trevor 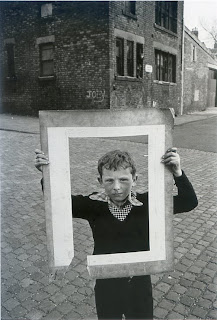 On 17th Feb 2008, photographer Paul Trevor received an e-mail out of the blue.

"...In 1975 I was a young 13 year old and remember you coming to our street, Mozart St in Liverpool 8... You came out with the kids and parents on our street outings... I also remember you taking photos of my friends and me in our 'den'... If you are the same Paul as I remember I would love you to contact me because I would love to see some of the photo's if they still exist. Yours hopefully, Ian Boland."


The photos did indeed exist. Paul had spent six months in Liverpool in taking photographs for a project documenting inner city deprivation.  He had thousands of photographs of Toxteth and Everton, very few of which had ever been shown publicly. 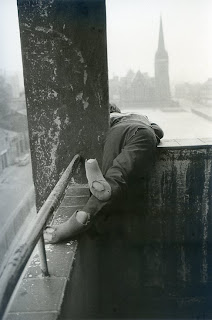 This captivating exhibition at the Walker Gallery in Liverpool documents both the photographic record of that period, and Paul's experience of returning to Liverpool to find some of the people he met and photographed nearly 40 years ago.

I loved the exhibition.  And people clearly loved and trusted Paul.  As he said in the film which is a central part of the exhibition, it would be impossible today to take these pictures of children playing.  But in the 70's there was no such limitation, and as a result, two very different cultures came together, either side of the camera, and got to know each other.  And they clearly still felt connected. One woman said "It's like you've never been away, Paul.", giving the exhibition its title. 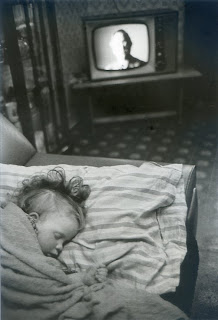 The poverty shown in the photographs is quite shocking, the dirt, the clothes full of holes, the dangerous play of the children, leaning over the balcony of a tower block, setting a fire in an empty house.  But others show great joy and community cohesion.  Paul also discovered some sad stories on his visit back to Liverpool, the boy looking through the frame who died young of a drug overdose, the breakup of communities for 'redevelopment'.

I hope that the project which began in 1975 and was revived by that 2008 e-mail will continue, and that Paul will take more remarkable pictures of this now dispersed community. 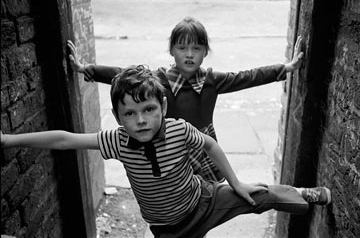 All photographs copyright Paul Trevor
Posted by annie harrison at 06:02 No comments: