We launched Manchester Time Piece in style on Midsummer's Day, 21st June.  With over 400 twitter followers, and lots of media interest, Tern Collective followed the shadow of the Beetham Tower from 7am to 7pm, mostly via maps and shadow plots due to the absence of sun! 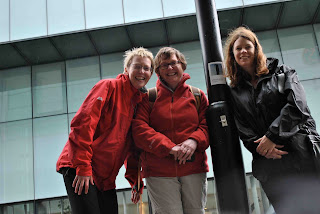 During the day we had visits from the press, and were featured in the Guardian and MEN, who created an animated shadow map based on our shadow locations.

We are delighted with how the day went, and are now starting to think about how to document the project, and where it might take us next.
Posted by annie harrison at 03:20