It's all go now for the new art project 'Manchester Time Piece' which launches on 21st June. It is a project of Tern Collective, which is made up of me, Jude Macpherson and Jacquline Wylie.  We've been working together for about a year now, and this is our first big project.

On Midsummer's Day, we will turn Manchester into a giant sundial using the shadow cast by the Beetham Tower, also known as the Hilton Tower, at 47 floors, the tallest building in Manchester. The project grew from another project proposal we made which never took off, but this one certainly has. We submitted it for the Manchester Art Crawl and the Burlington fine Art Club - both fringe events for the Manchester International Festival, and it was accepted by both! 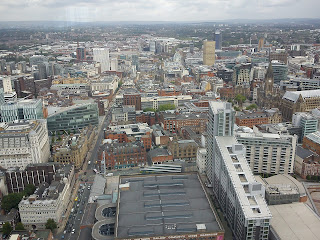 We have been experimenting with social media, and that seems to be working really well, the project is getting lots of interest on twitter, and we have a blog and a facebook group which so far are a bit slow, but hopefully will pick up.

Last week we had the opportunity to go to the top of the tower, which was amazing - we will be going back to take photo's of the shadow as soon as we get a decent day. In the meantime, here is a photo of the view down Deansgate.

If you want to follow us on Twitter, the project is @McrTimePiece. The Facebook group is Manchester Time Piece and our blog is at http://manchestertimepiece.tumblr.com
Posted by annie harrison at 14:06