Not the most catchy title for an exhibition, but the show is pretty diverse.  The exhibition covers the work of the three artists from the beginning of the 1970's to Matta-Clark's untimely death in '78, and includes installation, drawing, sculpture, and performance.

The artists were peers during a difficult period in New York's history, when the city was struggling with poverty and violence.  New York represented danger and risk, and it was a long time before the 'I heart NY' tourist campaign began to transform people's idea of the city. 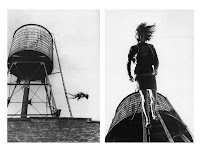 The other side of the economic meltdown, was the availability of cheap space for artists, dancers and performers who moved in en mass, turning the city into a laboratory for new creativity. Trisha Brown, a dancer who moved to New York from California in 1961, took dance out of the studio, for example, in 'Roof Piece' which stationed dancers on rooftops across the city, performing a synchronised improvised dance, or in 'Woman Walking Down a Ladder' where she walked horizontally from a water tower on the roof of a building, suspended by an invisible rope.
Three of her performance pieces are shown in the gallery, all involving an element of arial work. 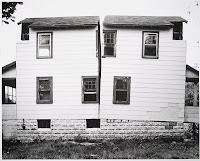 Matta-Clark, an architect by training, was interested in the fabric of the city, as well as it's inhabitants.  After helping to design and build a loft space for dance and performance, he established a cafe called 'Food', which was both an extension of his artistic practice, a flexible employer for freelancers and a place for artists to gather and socialise.  Amongst his other work was 'Splitting', which involved dissecting an entire house.  The four corners of the house's roof are presented in the gallery as sculptural objects, complete with chimney, roof tiles and wallpaper.

Laurie Anderson's sound pieces stretch from the domestic, 'Duet for Door Jamb and Violin' where the sound of the bow hitting the door frame as the musician stands in the door way creates a precussion for the piece, to the monumental, in 'Stereo Decoy: a Canadian-American Duet' which sees a piano suspended on a crane across the River Niagara.  All her work is illustrated with beautifully executed drawings, showing the skill that got her work as a political cartoonist while still a student.

The exhibition is fascinating, and has particular resonance as we enter a new economic crisis. It is an example to artists of how we can use even the most dire situations to create exciting and innovative work.
Posted by annie harrison at 07:48